November 20th - meeting on scientific collaborations between DFO and industry partners to conduct a longline survey and tagging project for Atlantic halibut for the year 2019 and beyond ( NAFO division 4RST), Mont-Jolie, Quebec. 1pm. John L. MacKinnon is attending.

September 11th: Meeting for all members at the Mabou Fire Hall at 7pm.

April 3rd: Crab draw meeting - looking for the memberships opinion on how the crab draw is
​                conducted. Options will be voted on at the meeting. 2pm at the Mabou Parish Hall.

New Information about the vote on Sunday:

It has come to our attention that several fishers will not be able to attend. In order to ensure all fishers have a vote, we will be sending anyone who does not attend the meeting a mail-in ballot. This ballot will have to be returned to Nicole Sampson, Department of Fisheries, by September 30, 2014. Any ballot received after this date will not be counted. All ballots will be counted on October 1, 2014 and the results will be posted on the website immediately. If you have any questions or concerns, please contact Inverness South.


September 14th: Carapace size vote: There will be a vote on Sunday, September 14, 2014 at 1:30pm at the Mabou Hall for all lobster harvesters in area 26B South. This vote is extremely important. You will be voting on whether or not to apply to DFO for a minimum carapace size increase to 82.5mm to be fazed in over three years (80mm in 2015, 81mm in 2016, and 82.5mm in 2017). The current minimum carapace size is 79mm. Please make every effort to attend and have your say on the issue.

April 28th: DFO will hold a meeting at 9:30am at the Port Hood Fire Hall to discuss this years conditions.

April 1, 2014: Gulf Nova Scotia Lobster Workshop taking place at the Charles V. Keating Millenium Centre in Antigonish from 9 am to 4 pm. Draft agenda below:
April 10, 2014: There is place for one member of the association to accompany Trevor to a meeting with Morley Knight, RDG/Gulf region, DFO on April 10, 2014. Discussions will include:

High level strategic thinking on the future of the fisheries

Progress on communications and collaboration among associations and update on shrimp.

March 8, 2014: Need help with the Online Registry System??? See the posters below for information on  FREE sessions being offered:
﻿March 6, 2014﻿. A meeting to discuss the development of a Green Crab pilot fishery for eel fyke net licence holders. Meeting will be on Thursday, March 6, 2014 at 1:30pm at the Gulf Nova Scotia Area Office in Antigonish.

Lobster panel meetings‏  - open to the public and all fishers if interested - on dec-17 from 1-5pm at the Antigonish legion- maritime lobster panel report information session. 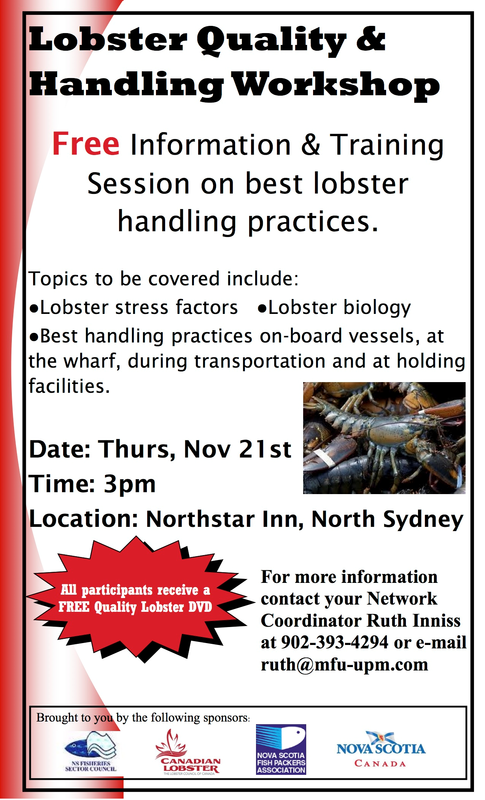